skip to main | skip to sidebar

My Quest For Perfect Bread 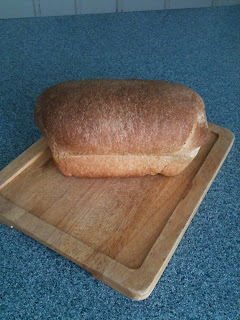 I've been baking my own bread for several months, now, and really enjoy doing it.  I wrote a post when I first started and showed pictures of my new mill I had ordered and some loaves of my first attempts at bread baking.  The bread had a wonderful flavor and my family seemed to like it, but they were using it more for toast than sandwiches.  It came out on the small side, not rising well and sometimes a little crumbly.  So, I started researching and experimenting with different recipes.  I'm happy to say I've found the way to make sandwich size loaves of bread with great flavor and holding together just like store bought.  I can attest that peanut butter and jelly tastes so amazing on it, just like the old white Wonder bread I remember, but this is whole wheat.
﻿﻿﻿ ﻿﻿﻿
﻿
﻿
﻿

I start out heating up a cup of water to no hotter than 110 degrees.  I add it to 4 1/2 teaspoons of yeast that I have ready in my Kitchen Aid bowl, mix together until well blended by hand with a whire whip.  I then grind about a cup of hard white wheat berries on the fine grind and add it to the yeast and water mixture and mix it in with the wire whip.  I then cover the bowl with a kitchen towel and leave it for about an hour. This is called making a "sponge."  When I return the mixture is active and bubbling.  To protect the yeast I add 1 1/2 cups of warm water with 2 more cups of the  freshly ground hard white wheat mixing it in by hand, still, and then add 1/2 cup of honey, 1 tablespoon of salt, 2 1/2 tablespoons of olive oil and 1/2 cup of high gluten flour.  By now I'm tired of mixing by hand, so I put on the dough hook for the Kitchenaid and start it on low and add about 1 to 2 more cups of hard white wheat flour.  You don't want the dough to sticky or too dry, so I add enough flour to where the dough is pulling away from the sides of the bowl and to where when it is ready to rise I can pick it up without it sticking to my hands.  I let the Kitchenaid knead the dough for about 10 minutes.  My daughter's Kitchenaid couldn't handle the 10 minutes, so we divided the dough in half giving each a turn for the 10 minutes, mine does just fine.  After the 10 minutes I take the dough out and rub some olive oil on it and return it to the bowl for the first rise, covering it with the kitchen towel.  The first rise is done when the dough has doubled in size.  Time to punch it down and divide into two and shape each one into a loaf and set in bread pans.  Cover, again, with towel and let rise until bread is risen 1 inch above rim of loaf pans and then bake in 350 degree oven 35 to 40 minutes.  I find my bread is done in 35 minutes in my glass loaf pans.  I like to use lecithin to grease the pans, my loaves fall right out when done cooking.  This recipe makes 2 loaves of delicious bread.  My family eats 6 to 8 loaves each week, keeping me busy baking bread!
﻿ ﻿
Posted by Kathy@theshebearofeleven at 11:31 PM 5 comments: 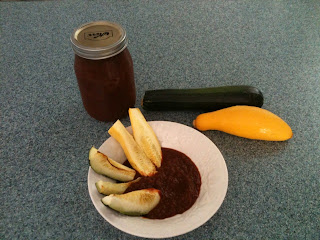 I've been overwhelmed with tomatoes this summer.  I planted fourteen tomato plants and have been given flats of them from a produce market for free.  I've made lots of spaghetti sauce, salsa,  used them in salads and sandwiches and have dehydrated them and then ground them into a powder to make my own tomato sauce this winter.
I was looking at my recent pickings from the garden and decided to make another spaghetti sauce for the next nights dinner.  I didn't feel like blanching them so remembered reading a tip on how you can freeze the tomatoes whole and then the peels will come right off under running water.  So that is what I did and it worked amazingly well.  So easy and quick. 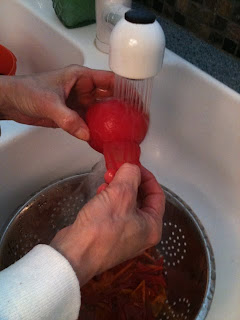 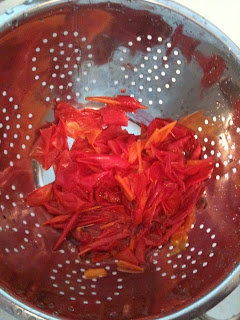 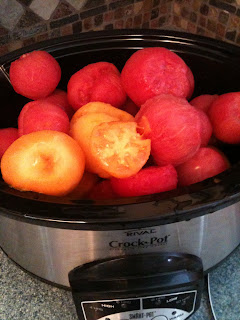 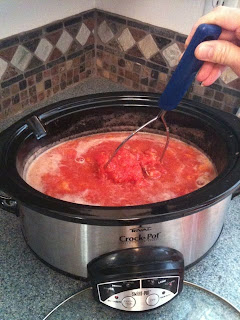 I skinned them all and put them in my crockpot on low until they were all soft and easy to mash.  After mashing I let them cook for several hours more in the crockpot and then added fresh basil, tomato paste, tomato sauce, onions, brown sugar, oregano, salt, elk meat and a chili peppper, we like spicy.  I then left on all night on low, still in the crockpot.  Served over angel hair spaghetti noodles and today over roasted zucchini squash.   So good.
Posted by Kathy@theshebearofeleven at 8:53 PM 4 comments:

In a couple of days it will be offficially fall.  The summer has gone by so fast, I really wasn't ready for the change in season, just yet.  But, time marches on and time to get ready for cooler weather.
In the garden I've picked all the onions and chopped them with my hand held food blender and then put them in a tupperware container in small sandwich bags ready for cold weather soups and casseroles. I learned this year that when you plant onions they need to be seperated and not planted in clumps.  Result was my onions didn't get as big as I would have liked because they were crowded.
I've been picking my herbs and then putting them in ice cube trays and freezing after adding water over them.  I then put the cubes in a large gallon baggie for storage in the freezeer. Works great as I can just add a cube or two to the dinner I'm preparing over the winter months. Speaking of herbs, my spaghetti sauce I canned was so tasty after using fresh basil from the garden.  Much better than the dried that I'm used to.
I'm still picking lots of tomatoes, zucchini and yellow squash, but I've noticed the plants are looking a little wilted and at the last of their production cycle, yet there are still many green tomatoes.  Last week I shredded some of the zucchini and made bread, which I will be doing, again, this week and then freezing the loaves.
﻿ ﻿ ﻿﻿﻿ ﻿﻿﻿ The winter squash are growing nicely and I'm excited to have quite a few of them this year.  I like to cook them in the oven and add brown sugar and butter, so delicious.  I have one little pumpkin growing, I wonder how big it will get before I have to pick it.  For some reason, I had many flower on the vine, but only one made it.  I will be looking  up tips on growing pumpkins for next year's garden.  Oh, well,  I still have so much to learn.  I wish I had learned to garden as a young wife, I would really have a lot of knowledge by now.
Posted by Kathy@theshebearofeleven at 9:27 PM 1 comment:

Guess Who Came To Dinner

We had dinner guests on Friday evening.  Five of our granchildren enjoyed some time with grandma and grandpa.  I think they will remember it for a long time.  Grandma went to pop some pop corn in the microwave for the movie time and to her and the grandchildren's surprise the bag caught on fire!  Good thing there was a box of baking soda on hand.  After all the excitement and a fresh bag of popcorn, movie went on as planned and we all had a fun time.
Posted by Kathy@theshebearofeleven at 9:17 PM 2 comments: 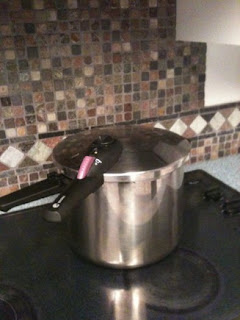 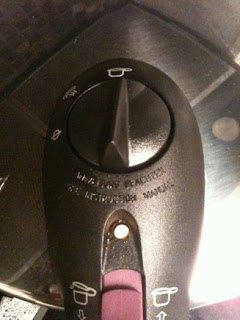 I have memories of my mom using a pressure cooker when I was a young girl.  The sound of it hissing and sputtering throughout the kitchen was intimidating after hearing the horror stories of ones that blew up if not used just right.  Those stories are the reason I never felt good about getting one myself.  But, after trying water bath canning this summer and liking it, I wanted to then get into pressure cooker canning so I could can the lower acid foods which couldn't be done safely in the water bath method.  So, I recently bought my very first pressure cooker and chose the Fagor model, a 10 quart size.  The first time I used it I was very nervous that I was going to make a mistake and blow something up, but it was so easy to use.  I canned spaghetti sauce, 17 quarts, and am quite pleased to have been successful.  I have since used it for cooking meals, making potatoes, carrots, pinto beans, string beans and rice.  I like how fast it cooks and am going to be trying many more recipes.  Today, I cooked carrots and it took about 2 minutes after pressure.  All I did was put in a small rack in the bottom, added a cup of water, sliced carrots.  Put on the lid, closed it and turned on the burner to high. Soon, a yellow valve popped up telling me it was at pressure and then the hissing sound of the steam. I then turned it down, but still hearing the steam and turned on the timer for 2 minutes.  After the 2 minutes I removed it from the burner and waited until the valve released.  So easy!!  The white rice I made over the weekend in it was the best white rice I have ever had.  So moist and delicious.  With the rice and pinto beans there is some soaking time, the rice one hour and the beans four hours.  The white rice took just bringing it to pressure and then taking the pot right off the burner, so quick!   I then added lime juice and a little salt,   The beans took 20 minutes of cooking time which I then turned into refried beans for a dip.  Pressure cooking is amazing and economical, saving time and energy and I am glad to have made this purchase.
Posted by Kathy@theshebearofeleven at 9:10 PM 2 comments: 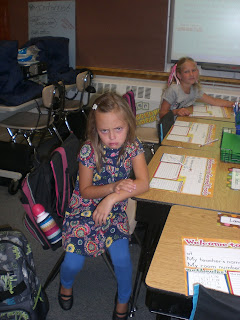 Granddaughter, Chloe, on her first day of second grade.  She's unhappy her friends from last year were put in the other class.
Posted by Kathy@theshebearofeleven at 11:35 AM 4 comments: 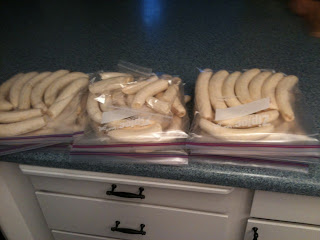 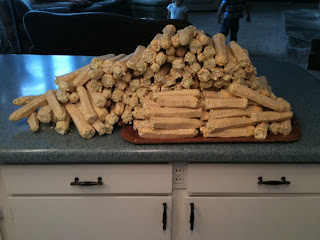 I was given 250 ears of corn and about 60 bananas, today.  That's right, given, translated, free!!!  My  husband and I got busy and shucked, then cut off the corn from the cob on all these ears of corn, taking several hours.  I loaded all nine trays on my Excalibur dehydrator with the corn, packaged the rest in gallon size bags and put in the refrigerator waiting for their turn on the dehydrator.  I just don't have the freezer room so dehydrating is my way of preserving all of it for winter.  The corn will be used in stews, soups, and corn muffins all winter.  I'll then put some of it in canning jars with oxygen absorbers and sealing most of it in food saver bags.  After all the work with the corn we peeled the bananas and then put them in gallon size bags ready for the freezer, which I had to use a shelf in my mom's freezer.  I really need to go through our two freezers and try to free up some space.  We'll use the bananas for smoothies and banana bread and muffins.  Receiving all this was such a blessing and I'm so thankful, but tired!
Posted by Kathy@theshebearofeleven at 9:42 PM 2 comments:

We are blessed grandparents!

Indeed, my heritage is beautiful to me. Psalm 16:6 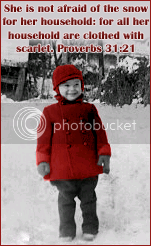 Kathy@theshebearofeleven
Married to my high school sweetheart for 38 years and have 11 children, 7 sons, 4 daughters. The oldest is 36 and the youngest is 16. Four of our children still live at home. We have been blessed with 20 grandchildren, 10 grandsons and 10 granddaughters. I have homeschooled for many years, loved doing it. All my children know and love the Lord which has made it all worthwhile.